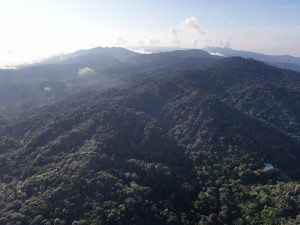 Terra Viva is proud to be part of the conservation movement in Monteverde. We participate by two means: by protecting climax forest, and also by allowing pasturelands to go wild in the regeneration process.

At Terra Viva, we believe that buying and protecting forests is not enough. We encourage others to buy cleared pastureland neighboring us and to allow this land to become forest, therefore increasing the total amount of forested lands in the country.

A walk through the Monteverde cloud forest reveals a lush green garden of mosses, ferns, flowers and epiphytes growing thickly on every tree. Clouds drift in and settle among the slopes, giving the continuous moisture required for such exuberant plant growth. Dangling roots and vines sweep across the trails. The air is rich with the sounds of birds and the occasional scurrying of small mammals on the forest floor is always magic.

Monteverde is a highland forest characterized by nearly 100% humidity throughout the year. Here in the Reserve, warm North-Easterly trade winds, filled with moisture, blow in over the Atlantic. As the winds sweep up to the Continental divide, they cool and condense to form clouds, bathing the forest in a constant soft mist. The cloud forest receives our meters of rain every year- that is almost twelve feet.

One of the cloud forest characteristic is the abundance of vegetation. Competition for growing space is so intense that trunks and branches are almost entirely covered epiphytes, lichens, liverworts, bryophytes and mosses. The epiphyte mats store moisture, which is specially important in the dry season (February to May). The lush cloud forest canopy is thus home to many species of insects, amphibians, and mammals which never even come down to the rainforest forest floor. is a highland forest characterized by nearly 100% humidity throughout the year.

It all started this way:

Monteverde was first inhabited in the 1930’s by Costa Ricans colonist who were trying to make a living by logging and farming, claiming undeveloped land quite similar the the early far west times. In 1949, 4 pacifist Quakers from Alabama were jailed for refusing the Korean War draft. After getting out of jail along with their community of Friend’s (the other name for their Christian religious group) they searched for a country where they could live in peace. Costa Rica attracted them because it does not have an army and the area was interesting because it was so green, underdeveloped & the cool climate was perfect for dairy farming.
In 1951, 44 Quaker settlers from 11 families came to the area and coined the name (meaning green mountain in Spanish). They brought with them their sense of friendship & cooperation.

Other Reserves and contacts with friends

Tropical Science Center – the not for profit organization managing the Monteverde Preserve.

Friends of Monteverde Cloud Forest Preserve – a U.S. based non-profit organization dedicated to preserve the biodiversity of the
Cloud Forest Preserve. Mission is to protect and manage the forest and wildlife resources of Monteverde, to serve the community and facilitate their participation in resource management activities; and to provide all visitors the opportunity to enjoy and learn about the forest and biodiversity of the Reserve. friends@cct.or.cr, P.O. Box 1964 Cleveland Ohio, 44106-0164 U.S.A.

Monteverde Conservation League – established in 1986 out of concern for the threatened forest in the Tilaran Mountains. Since then, children and adults from over 40 countries have raised money which has enabled the League to purchase more than 54,000 acres of land, the biggest private reserve in Costa Rica. It is named Bosque Eterno de los Ninos in honor of all the children who have contributed to its protection. Mission: to conserve, preserve and rehabilitate tropical ecosystems and their biodiversity.

Monteverde Institute – a non-profit educational association by residents, the MVI blends international study and research with educational and cultural opportunities for local Monteverde communities. Organizers of the annual Monteverde Music Festival. The MVI also sponsors and supports research that can be applied to local, national and international issues of environmental degradation and the decline of biodiversity, rapid social and demographic change, and community health.

Monteverde Costa Rica Cloud Forest research data base – Over 125 ecologists, agriculturists, and educators have contributed to the natural history and ecology of the area. Our objectives are to bring together the extensive body of knowledge that researchers and natural historians have gathered; to point up connections, to identify areas for future research. Extensive bibliography related to the area.

Monteverde Natural History – Plants & butterflies of the area: Identification and Other Resources by William A. Haber.

ENJOY FOR FREE!
1. Private Reserve with 4 miles of trails for walking / hiking. You may want to avoid walking through a more touristy reserve.
2. The famous Resplendent Quetzal breeds here abundantly.
3. Free self guided maps for our guests.
4. See, touch, taste, smell, learn and have fun with our animal companions. Your children will be in heaven.
5. Costa Rican life: "Terra Viva is located in a little valley, from there, one doesn´t see other houses or buildings. A beautiful and really unspoiled natural setting; the chance for city folks to go around and see farm work and animals; and maybe most importantly, the opportunity to experience a little slice of Costa Rican daily life".
6. Location. Terra Viva is about 5 minute drive from Santa Elena, and is completely away from the hustle and bustle of Monteverde.
7.Wireless Internet available 24/7.
8. Our water is spring fed, it is rich in minerals and good for ingestion and for the skin.
9. Hot showers at Finca Terra Viva are heated by very modern and efficient solar heaters.
Social Network